We weren’t too sure or in the know about either of the Botanical Gardens and Lighting of the Lagoa tree, but having spoke to a few Cariocas, they had said that the gardens are a welcome break from the Rio hustle and bustle and that the lighting of the tree is truly unmissable if you are in Rio at the time. Even if you aren’t in Rio at the time, it turns out that mr.google says that it is the 3rd biggest event now in Rio which draws tourists to this wonderful playground and since starting in 1996 has only grew in worldwide popularity year by year! So yeah, we were pretty excited for that.

As the Botanical gardens was in the same area as where we would be watching the tree lighting and fireworks, we decided to kill two birds with one stone and head their first, spend some time mooching around the gardens, eat and then join in with the festivities. Thanks to Rio traffic though and the lack of the bus we needed, when we needed it, we spent over 1-2 hours just getting there!! Although we weren’t anticipating it, there was a very small entrance fee attached with visiting the gardens, which is R$6 each, like I say….very small. Once you see where the money goes it is certainly money well spent.

We were immediately met with towering palm trees, which created a natural perimeter fence separating the urban jungle, from the (re-planted) real thing.

The gardens was also the most organised I have ever seen, with a fully detailed map, road names for all of the paths and points of interest all around the vast gardens. Unfortunately for us, it had taken us so long to get there, that we only had 1 1/2 hours until the park closed at 5pm! Which given its size would probably be a flexible 5, but it certainly didn’t give us as much freedom as we would have liked to roam carelessly. So with our little map in hand, we planned out a little ‘logical’ route that would take us on a big loop around the gardens and cover the majority of things to see, it just meant we couldn’t really just sit around and take it all in! As well as having orchards, rose gardens, huge palm trees and wild life, the gardens also had a really nice Japanese garden, which I am not too sure on the reason for, but does anybody need an excuse to make a Japanese garden?! It was a really prim and propa area, with a really big pond full of Koi fish, lotus flowers and a pagoda.

As we strolled around slightly aimlessly, we were consistently under the shadow of humongess trees, towering above us and creating a natural archway. 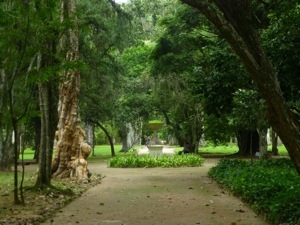 There was also one area of thick bamboo and shrubbery which was home to a little family of marmosets, which once again, we were quite content just watching them play away in their natural habitat and look very confused about why the huge, white thing was trying to point something at them and take pictures. 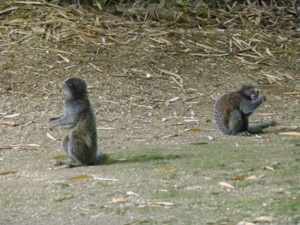 It was a real little tranquil hideaway that allowed Cariocas to escape the beeping horns, whizzing motos and touts selling their wares. Although it was all planted and you really couldn’t tell that this wasn’t a wild forest or small slice of the jungle. We would have loved to have spent much longer here and probably will go back there if we had a chance, to simply wind away the hours and enjoy nature at its best, all while under the watchful eye of big jesus (as always). 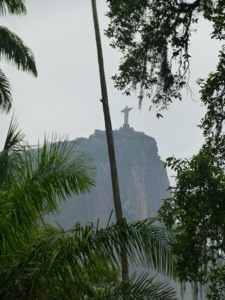 Once we had been subtly herded out of the park, we made our way down to Lagoa Rodrigo de Freitas to see what all the fuss was about. When we arrived there wasn’t really much going on, apart from a few people sat next to the waters edge and a few others sat in a restaraunt facing the lake. So our immediate thought was that we were in the wrong place, as we had heard on the other side of the lake there was a stage, music, big crowds and hundreds of vendors. We opted to wait it out in the restaraunt, to shelter from the rain and see how things developed, as we were there by 6:30pm and nothing was meant to start until 8pm earliest, which was fine, as we would pass the time snacking and throwing back some beers. Come 8pm, nothing had really changed, although lots of people had turned up and the gathering had turned into quite a large crowd by this point. So we decided to get ourselves a front row seat before the crowd got any bigger. We found out that things did start at 8pm,but on the other side of the lake, on the stage.

Our wait wasn’t too long though, at 9pm the huge tree (worlds largest floating tree) sparked into life and was fully lit up in a deep blue, then immediately after the sky erupted, by this point anyone in a 1km vicinity had flocked to the waters edge and had simultaneously started cheering and celebrating as if the new year had just been seen in! The sky was alight for a good 15minutes, with huge fireworks that eventually smoked out the majority of the lake, but it was quite clear why people chose this side, as the panoramic view of the epic fireworks display was awesome, even whilst we were hiding under our umbrella.

Once the sky bombardment had finally stopped, there was a vast smokey cloud over the lake and the loud bangs were replaced by hundreds, if not thousands of people cheering and clapping. It was a true welcoming to the xmas period and if anybody knows how to celebrate, its the Brazilians.