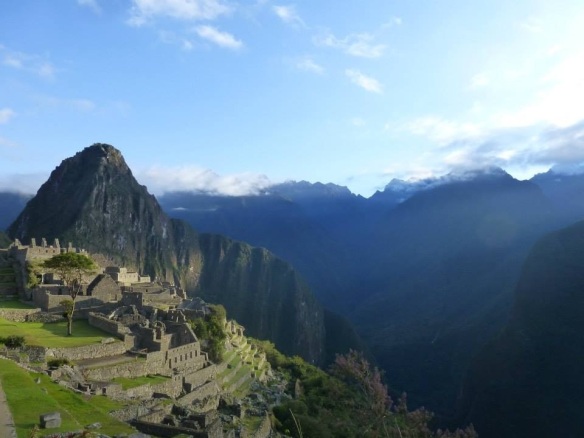 We always knew we would not do the normal trek up to Machu Picchu, mainly because it books up 6 months in advance (and we hate being tied to a schedule) and because it sounds boring as hell. Walking for 4 days straight. Just walking, nothing else. Zzzzzzz….

So we tried to research some companies who do a more varied trek. In the end we opted for Lorenzo tours who offered downhill mountain biking, trekking, ziplining and rafting. It costs half the price of the normal trek with a lot more excitement. So we got picked up at 5.45am the first morning and taken for some breakfast when the bikes were loaded on top of the van and everyone got to know each other. We were very lucky as there was only 7 of us on the trek. After brekkie we jumped back in the van and headed for our highest point to start the downhill mountain biking, at 4,300m above sea level. We felt OK at this altitude, just a bit cold, but others felt dizzy, vomited etc. Lucky we didn’t stay at that height for long. We got geared up and started our quick descent down the mountain accompanied by beautiful scenery.

This first day was comparatively easy upon reflection. We biked for around 5 hours, majority of it downhill before we ended at our eating place for lunch. The rest of the afternoon we got to relax and explore the local village. We relaxed in our semi-open air room for a bit before heading out, I say ‘semi-open air’ as our windows did not actually meet the ceiling, so once it got dark we decided to not turn any lights on. Didn’t want any unwanted guests in with us!

The next morning we met at 7am for brekkie before our big day of walking began at 8am. Our guide was fantastic the whole way, giving amazing insight into history and answering all of our questions that we had. We started on the flats and as the day progressed the mountains got steeper. Firstly we walked around a small mountain side trail and stopped in a coca leaf farm where we had a try of the chewing of the leaves. It was OK, just tasted like chewing on a tea bag really, just a bit fresher. We carried on our trek and started going up some really steep hills, but stopping every so often for our guide to run up a tree and pick some fruit, or fish for termites for us to try! At the steepest parts we also stopped at some local villages to be shown some local traditions and foods.

The trek was truly amazing as we walked through such varied terrain, from a dusty mountain side, to the lush jungle mountain, to an original Inca trail which had only been discovered by the founder of the company we were trekking with (Lorenzo) in 2003 or something close to that date. The beauty of this was that we only saw one other group our whole 4 days, unlike the normal trek where you fight for space to walk against extremely aggressive walkers with sharp pointy walking sticks. Not my cup of tea.
So after a good 4 hours going up at a horrible degree we were rewarded with beautiful views of the valley we just trekked through. After that it was mainly downhill, which is not as easy as it sounds on 600 year old wonky steps with a 400m drop to your immediate left. After lunch we finished the walk off through some long reeds, travelling over a river in a hand pulled cable car and then scrambling over rocks to end our day in natural volcanic springs. Perfect end to a hard but rewarding day. Its safe to say I hobbled to bed that night. 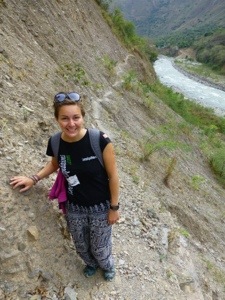 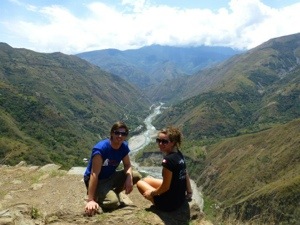 The third day comprised of ziplining in the morning which I thought would give my legs a break, but we still had to hike up a steep mountain to our starting point. This walk was a lot slower than the day before that’s for sure! So we did our first zipline and I was bricking it. I do not like heights, so this was a big deal for me and I was very close to backing out, but after I did the first one, i just wanted to do more and mote! It was a great feeling flying through the air above lakes and forests. Adam did one in the superman style, but I was happy sticking to the normal way you fly through the air on a piece of wire. However that is. In total we did 4 ziplines, the longest being 1KM long and 400m high. It was sooooooo much fun! After lunch we had an easy (flat) walk through the jungle and along the train tracks to end our day in Aguas Calientes. Again, hobbled not only to bed but also to dinner… 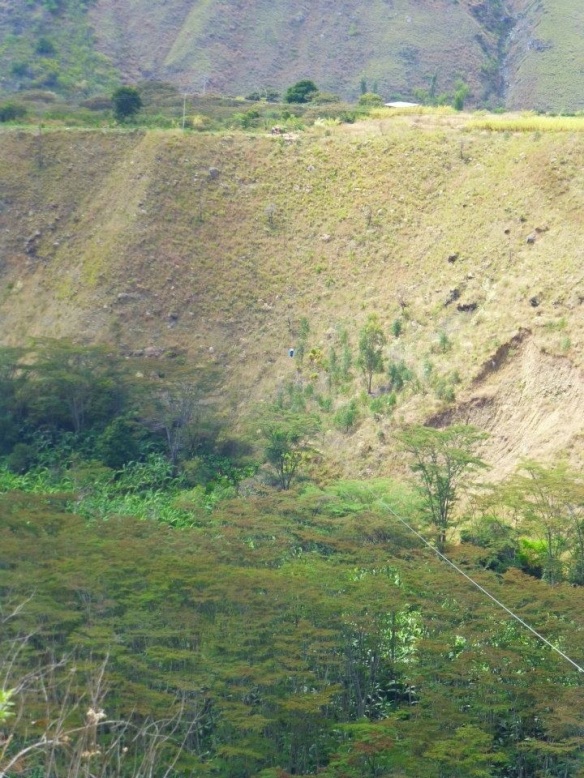 Can you see the dot in the middle? That’s Adam!

We woke up on our last morning at 3.45am to meet for our walk to the gates at 4.15am. This walk took us about half an hour, with me hobbling at the back, smacking my head-torch (whilst on my head) to make it work. We also had some canine companions accompany us pretty much from our hostel and waited with us at the gates. I was walking so slow, even the dog with the limp was infront of me! 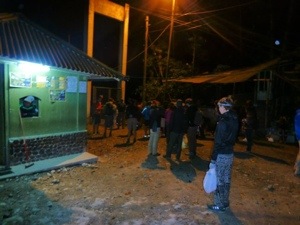 Once waiting at the gates, we had a little snack and just quietly waited…then some overly pumped up young North Americans loudly entered and pushed their way to the front of the gates stating loudly how the were going to be the first ones there…bla bla bla bla…Zzzzzz… Any-who, the gates opened at 5am and we began our last ascent up the 1,800 steps to Machu Picchu. I’ve got to say, with our legs in bits, we took it nice and slow but still did it in 50mins and it was meant to take an hour. I have 2 favourite parts to this last walk. 1) seeing ‘limpy’ our dog mascot meet us at the top and 2) overtaking some of the arrogant North Americans about half way! No, but really, reaching the top was amazing! After 4 days, you realise you are actually there and its a great feeling. I also expected to be greeted with the sight of Machu Picchu, but instead was greeted with a public toilet and large entrance queue. Still, the loo was a happy sight!

So we entered Machi Picchu with our group and our tour guide gave us an amazing 3 hour tour around the sight. We still had more steps though, every single step felt like a colossus effort. I was promised no more steps after the last 1,800 and someone lied to me…! It was all worth it though, the history, the architecture and the views were truly awe inspiring. The massive groups of tourists which turned up about 10am were not. After our tour ended, we spent a few more hours wandering around and trying to find a secret spot to eat some brekkie/lunch with the best views in the world without being caught. We achieved both and left happy. Only 1,800 steps down now…no biggy… 😥

We finished a great (hard) 4 days with a couple of beers and a massage, perfect! 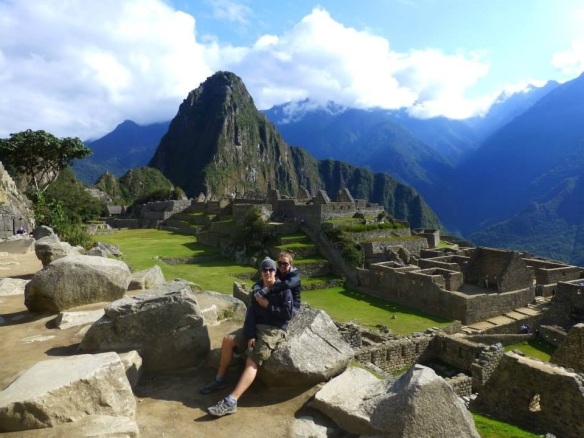 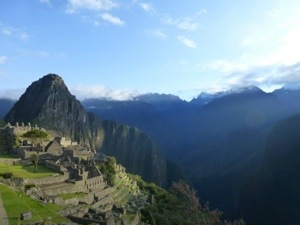