After finally arriving in Cusco from our little detour through Copacabana and Puno, we were delighted to hear that some of our friends from the animal sanctuary would also be arriving at the same time and to make things even sweeter, our friends that were already there, had made all the necessary arrangement at the cheapest hostel in town for our arrival. So all of the hard leg work was already done for us………….nice.

We were quite surprised by Cusco, as our intial ideas (from hearsay whilst travelling) were lots of tourists and the majority of them from the US everywhere, making it impossible to soak up any local culture. Also that the architecture was all modernised and it was impossible to get a warm feeling about the place. The only thing that prevented us getting a warm feeling about Cusco was the fact it was below 5 degrees, constantly. Other than that the city was laced with beautiful old architecture, some which dated back as far as the incas (with obvious improvements to maintain the structure). As far as food went, we ate cheaply and locally every single day, without issues. Ofcourse if your somehow unable to pull yourself away from the very, very touristy ´plaza de armas´ then ofcourse all you will find is Starbucks, McDonalds, KFC and an Irish Pub, but luckily we are not all from the US and some of us make effort to find good food. 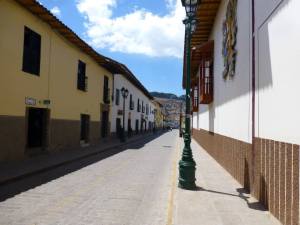 As the main attraction to Cusco is obviously Machu Picchu, there isn´t a vast array within the city to see, that doesn´t come with a high price. Walking around on the free tour though, was a great opportunity to pretty much see what Cusco had to offer in the way of beautiful buildings and view points over the city. Most of our time spent here, was making up for what we didn´t get to do at the animal sanctuary with our friends and that was grab a lot of beers, have a good old chin wag and stay up until the early hours. Most of the time it was spent talking about the animal sanctuary and how we all really, really missed it, as well as organising when and where we will all next meet in the world, which it turns out, might be Rio!!

One thing we had been highly recommended to do whilst in Cusco, was to try “Cuy” or to us english speakers “guinea pig”!!!!! However this “delicasey” has soared in price over recent years thanks to tourism and it is very hard to try Cuy for under 40GBP, not unless ofcourse your willing to speak to the locals and take a 20minute taxi to the outskirts of town, thats when you strike gold and find the thing everybody is looking for, but for a quarter of the price! Having said that, it can be as cheap as it wants to be, it still looks and tastes horrible. The flavour was very gamey, but still nowhere near as nice as rabbit, pheasant etc. Atleast I can now say I have been there, done that and tasted the piggy!!! 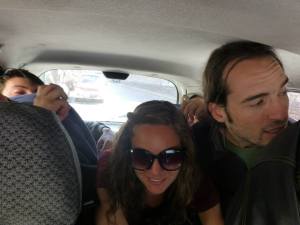 5 into the back of a micra…easy

The rest of the food in Cusco was similar to their neighbours Bolivia, lots of deep fried chicken and chips, lomo beef with chips, rice, onions and mayo etc. There was one dish though, which was a speciality of Peru and was meant to be very good in the Mercardo San Pedro, which was Cerviche. The only way to describe the dish, was a poor mans sushi! In that I mean no seawood, no rice and certainly no fancy slices of exotic fish. Instead what you get is a plate of onion salad, corn and what I believe to be raw river fish! Of which kind I haven´t a clue. It sounds insane, but it tasted great and the I am still yet to throw up from it, so I think they are onto a good thing.

The time we spent in Cusco was more of a slow build up, to our Inca Jungle Trek, getting our gear ready, packing, unpacking and packing again our small rucksack to make it light as possible. As well, as I am sure you can tell, spending a lot of time with our friends eating lots of different foods and just generally doing the best past time of all Latin Americans (and Spaniards), spending quality time with your friends, usually with a beer in hand and good grub on your plate.