We got the post-monkey-blues bad. Real bad. I even dreamt about them swinging around our dingy room a few times.

It also doesn’t help that after leaving a beautiful jungle we entered possibly the ugliest city we have come across so far. La Paz, although is impressive with its altitude (it sits 3,640m above sea level) that is about as good as it gets. The city is ridiculously over crowded, we watched people trying to enter and leave the city for work, literally fighting to get on a tiny minivan/bus, so that they wouldn’t have to queue for another 2 hours. Not a great start to the day. Traffic is horrendous 24 hours a day and crossing any road, even those with pedestrian lights, is a bit of a life gamble. Also, the food sucks. We took a free walking tour and we were shown “traditional food” from La Paz and were shown a fast food chicken restaurant. How depressing, the chicken wasn’t even that good.

La Paz is so bad, that the prisoners at the infamous San Pedro prison, prefer to stay in there than to leave, as their quality of life is better in there. To give a quick insight into San Pedro, it is the only prison sponsored by Coca-Cola and has its own cafes, restaurants, gym and the prisoners can live in there with their family (if they can afford the rent…yes, you heard correctly…they pay rent…) And only recently did they close the prison to tourists as people were going in, but not as many were coming out. Although we were kindly offered a tour by two lovely prisoners on day release… :s

The one thing that we loved and saw all over the city were the old ‘Dodge’ buses with beautiful paint jobs. We really wanted to get on one, but had no idea where we would end up, and La Paz is pretty big. Wouldn’t want to end up in the wrong end of town! 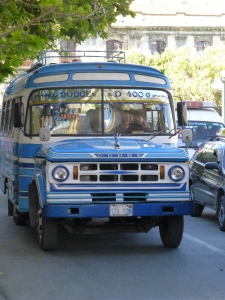