Leaving our host family was hard, very hard. We built up a lovely relationship which we hope will last, but the only thing that made leaving them easier was the knowledge that we were moving onto volunteer at La Senda Verde animal sanctuary (LSV). We had been in contact with Vicky, one of the owners for over a year and had always been looking forward to this part of our journey.

We left Sucre on a night bus and arrived in a very cold and depressing looking La Paz at 7am. We toileted, grabbed a quick coffee before getting a taxi to the local bus station, Villa Fatima where we paid 20Bs each (under 2 GBP) for a seat in a cosy mini van which would take us over and through the mountains and for part of it on the old famous ´Death Road´ before we arrived in Coroico, which is a beautiful mountainside town in the Nor Yungas Province. From there we got a taxi down to La Senda Verde and finally arrived in the middle of the afternoon after travelling for about 20 hours. We couldn´t have been happier to have arrived!

Once we walked over the suspension bridge we wandered through trying to find our way with all our bags and were amazed by everything we saw, macaws flying over head and spider monkeys just sunbathing in the sun. I got so excited and distracted I started to walk straight towards them until I heard Adam, “ummm…Cheryl…your in a no entry area, do you wana get back on the path?” Woops! I just got a bit carried away. We finally found where we should be, were warmly greeted and a plate of hot food put in front of us! Perfect! We were introduced to the other volunteers and had the afternoon to settle ourselves and get orientated with the place before we started work the next morning. Everyone we met was so helpful, friendly and made us feel welcome and instantly part of the family.

One of the lovely vets, Adriana talked us through the rota and how it worked, there are 4 areas to work within where you spend between 3-4 days before you move onto the next: Turtles, tortoises and bears; Birds; Quarantine; Monkeys. As a female volunteer I found out I couldn’t work within the monkey area and was instantly disappointed as they are my favourite animals, but was quickly reassured I would get enough monkey time without having to feed them and clear up their poop. Fine by me! On my first day I was on Turtles, tortoises and bears with another girl and Adam was on Birds with 2 other people and we were shown the ropes. This is how it works for all the areas and you then teach the next person who comes onto roatation with you. Pretty easy process to follow and easy to pass on.

We enjoyed every day we spent in La Senda Verde and I put that down to the amazing people we worked alongside. We were lucky enough to volunteer alongside people who were motivated, hardworking, funny and just amazing to be around. We seemed to form a little family, everyone looking out for everyone else and giving a helping hand when needed. Spending all meal times together as well helped as we talked constantly about all types of rubbish ranging from how to take down the Spanish government to which monkey peed on who.

During my time at LSV I was lucky enough to help our with the baby monkey program. This is where a female volunteer looks after one baby monkey 24/7 including sleeping, eating and spending all day with them. I just missed the chance to be part of this by 1 day, but I did get to do babysitting duties for not 1 but 2 different babies. One baby female golden howler (Maya) who we think is around 8 months and one female spider monkey (Mancha) who arrived a few days before us after having been resuced from the illegal traffiking trade and we believe she was around 4 months. 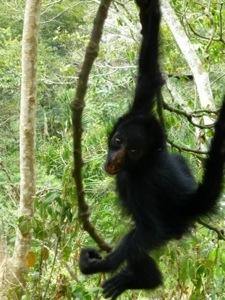 I loved every minute with them. Watching them climb in the trees and become more confident in themselves and seeing their personalities emerge was truly amazing and something that will stay with me for a long time. Nap time was the best though. It got to the point that the baby spider, Mancha knew that when she saw me in the afternoon, she realised it was nap time and came down to greet me for a 30 minute nap. Sometimes Maya joined us as well, but as she is older she is far more independent and often took naps by herself. But when she did decide to join us, either she managed to make room for herself on me somewhere, or would annoy Mancha so much that the two would just end up play fighting instead. 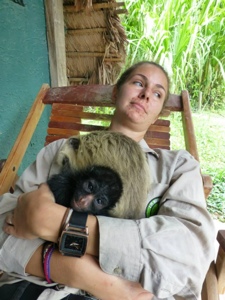 Adam found that after working in the Monkey area that he formed quite good bonds with the Capuchins. Certain ones would run up to him whenever he went up there and give him a good grooming whilst squeaking away. He also had a soft spot for a little female Lukachi monkey called Lukaluka, she was only a baby and no bigger than a large hamster. She lived in the food prep room with her human mamma whilst her new enclosure was being built and every time he went in there little Luka would come see what he was upto. This meeting normally ended up with him tickling her and her trying to play bite him. (Everyone say awwwwww….!) 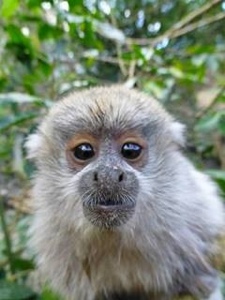 My favourites were definatly the Spider monkeys and the Howlers. I don´t know how or why but the Spiders smelt amazing! You would just walk past and be able to smell them before you saw them. It was a very calming and reasurring smell. They also made funny noises and pulled the best faces at you if there were not getting their own way. There was one Spider in particular which took my heart, a young female called Kalua, she was no more than a few years old and had the best temprament and attitude, not only towards people but towards the younger monkeys as well. It amazes me how good her attitude was to people as she had a horrible history with them. We were told that when her mother was shot from the tree some of the shotgun pellets got lodged in her spine and when she arrived at LSV she still had the shards in her. She was operated on but the bullets permantly damaged her spinal cord which affects the way she moves on the floor and in the trees. It´s safe to say I had a soft spot for her! Mancha and Maya (the 2 babies I mentioned earlier) were also a favourite of mine, purely because I was able to spend so much time with them and got to know them and their personality traits. 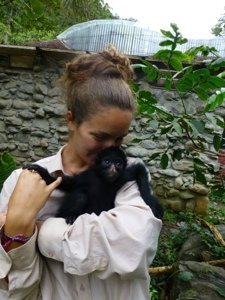 Both myself and Adam were amazed by LSV, the work they do and how constantly positive all the staff members are. Working within a non profit organisation with no government funding can only be a stressful way of life, but everyone has such a great attitude and so much love for all the animals that come to them. It is inspiring.

After 2 weeks, our time was up. We were both looking for excuses to stay as we did not want to leave but it all came down to our visa, our days are running out and we have more to see. I know what I will miss though…all the little things, like the grumbles Maya used to give in your ear or Manchas post nap wee that soaked my side every time. For Adam, the monkey cuddles and grooming. His hair hasn´t looked so good before.

LSV we loved every minute we spent with you and will return one day.