Chiang Mai, as I have said before has an old city which is surrounded by old stone walls, and within these walls (and some outside) there are many wats (temples) within walking distance of each other.

You many have noticed from previous posts that we have been to see a lot of wats. That’s because there is a lot of them to see! Simple as that. Within Chiang Mai’s walls, from just one day of traipsing around we uncovered some little gems, “ah”, I hear you say “but once you’ve seen one wat, you’ve seen them all.” My answer to that, yes and no. Yes, there have been a few wats that we walked into and walked straight back out again, as it looked just like another one we had seen, but here in Chiang Mai we discovered at least 3 wats which for 2 non-buddhists (but willing to learn) we found particularly interesting and even helpful.

Wat Chiang Man is a small but stunning temple where every inch of wall space is covered in paintings depicting buddhas life from birth. The paintings were beautifully done and it really helped us to understand the beginnings of Buddhism. Wat Phra Sing was the first temple we saw that had flags hanging from the ceilings, some containing money and others with print on of the signs of the zodiac.We stepped back and watched what went on, and saw some Thai people buy the empty flag and fill them with money (we couldn’t tell if it was real or not) and then find a space to hand them from the grid on the ceiling of the temple. Again, we were not too sure why they did this, perhaps as an offering, or for good luck. Either way, it was a new thing that we had not seen at a temple, and another thing to add to our long list of “why do they do this…?” 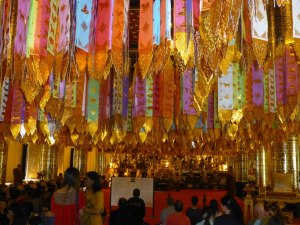 Wat Chedi Luang was a firm favourite for both of us as there was so much going on, not only was there a temple on the site, but there was a school, a buddhist monk college/university and a relic of an old temple too, and everything was explained in Thai and English, a true rarity but so helpful. Within the temple itself, there was so much to take in (I believe we had the good grace of optimal timing.) As we walked in, we had a look around and were happy to see some explanations in English and then some Buddhist Monks walked and began chanting. There was an elder at the front reading out the 200 odd laws with the younger monks sat facing him. From what we understand (from the English translation and from what we observed) this was the time for a monk to (for lack of a better word) ‘repent’ any laws he has broken by confiding in another monk. Also the whole ceiling was covered by these low hanging flags, there could have been hundreds or even thousands covering the entirety of the buildings ceiling, but these ones did not contain money like in Wat Phra Sing, only print with the signs of the Chinese/Thai zodiac. Again, why? We do not know!

We left the building and began to wander the grounds, and the first thing we came across was trees covered in ancient proverbs, which we enjoyed reading. Then we saw a big sign welcoming visitors to “Come have a talk with a monk. Don’t stand by, come and have a chat!” …..Well, this took our interest; should we? Can we? It’s a bit daunting, mind. Umm, right we’ll walk around the grounds once, nip to the loo, and once we come back round again, we’ll do it. We agreed and started our (decisively slow) walk around the grounds. We previously had so many questions about Buddhism and the rituals carried out within temples among other questions, but under pressure we both drew a blank. Errmm…we can’t just go in there with nothing! So we wracked our brains to try and remember what we wanted to know.

Once we had completed our full circuit we took a few deep breaths and stepped over the threshold into what felt like a very daunting situation. How wrong we were. A young monk came and sat with us and began chatting away! Phew, he is a normal person, what a relief! He began asking about us and general info and then we slowly chimed in with our own questions, “What is the correct way to conduct yourself in a wat? Why do people light incense, and carry flowers? What is the proper way to place your hands in respect? Why are there so many different poses of Buddha?” All the answers he gave in fluent English (of which he has only been learning for 1 year, we later found out!) Then questions moved onto him, “What made you become a monk, where are you from? Whats your daily life like? How long have you been here? Where do you want to move onto?”

I won’t bore you with the answers, but just let you know that talking with him was definitely the highlight of our day (or perhaps even the trip so far,) to see just a glimpse, an insight into his world was truly fascinating.

Oh, we also went to the zoo. It was alright.

2 thoughts on “Chatting with a Monk”