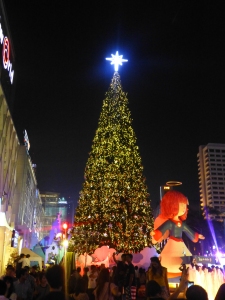 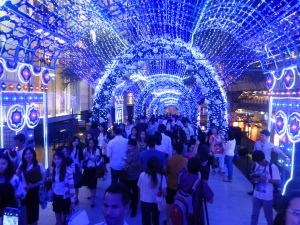 We arrived in Bangkok on the 22nd after a 5 hour mini bus and boat ride from Koh Chang. When we arrived unfortunately Expedia had kindly declined to let the hotel know we were coming, however to our relief, the hotel were happy to help and put us up in the 4 star sister hotel for the night, which was a true taste of luxury. We then returned to our original hotel/apartment the next day and for our troubles the room was upgraded…….win.

Bangkok is truly an amazing city and there is far too much to do within the space of 10 days, which is why we decided to tick off as many things as possible in one day and get as much done as we could in the short space of time we had.

Our first tick off was courtesy of an old Uni friend who is now working and living in Bangkok and showed us around one of the many shopping complexes ‘MBK’. We then went over to Khao San road via our first tuk tuk, which is known as the backpacker epicentre of Bangkok. If you imagine the Zante, Malia strip and the west end of Ibiza all in one place, this was it!! Touts louring you into every bar, small kids selling flowers, stalls selling fried scorpions, cockroaches, maggots, grasshopper, you name it and looky looky men selling dvds, sunglasses and watches, were just some of the sights you could see along the road. We headed for some local food first to line the stomach, before hitting the strip and getting ourselves involved in the action. With the large Chang’s (big bottles) and cocktail buckets having defeated us, we headed our way home, via break dancers and locals dancing in groups to gangnam style. As great fun as it was, i am not sure i could handle staying in Khao San for longer than a night out, as there are much nice areas to explore.

After a day of tirelessly roaming the vast 8 levels of MBK, the next day (christmas day) was tourist time. Starting with the Marble Temple (Wat Benchamabophi) where we saw a lot of buddhas and set some turtles free in the river. We then moved onto the Royal Throne Hall (Anantasamakhorn) where we saw the Thai equivalent of the crown jewels, just with a lot more Gold and bug wings. We then headed over to the worlds largest teak mansion (Vimanmek) where there was ALOT of wood, surprise, surprise! Then we had a break from buddhas, royal ness and fancy jewelry and headed to Dusit Zoo to see lots of interesting animals, which mostly inhabited parts of Thailand. Which given the size of some of the snakes and spiders, Cheryl was very thankful we weren’t visiting those parts!

The next day (boxing day) was again jam packed with wats and buddhas. Ours plans were to ride the sky train to the southern most ferry port and tour up the river. However the tuk tuk driver and his friend decided to take us on a tour of Bangkok and try and drop us at the port where his mate ran £44 boat tours instead of the 10p boat ride we planned to get. Luckily we had our wits about us and kindly declined, but thankful for the tuk tuk only charging us 30p given the distance we travelled, obviously thinking we would fall for the boat tour scam. Once back on track and we found the legit port, we headed upto Wat Arun which had lots of steps and was very steap and provided great views of Bangkok. Then after a boat crossing we headed to Wat Pho, home of the giant reclining Buddha. We then planned to head to the Grand Palace/emerald buddha, however the sarong i had been given from the royal palace was for ladies and they wouldn’t let me go in! So, alas it was to be seen on another day.

The same night we headed out to Siam to visit the various shopping malls with their Christmas decorations and various stalls with live bands on, organised by different beers and spirits, each trying to outdo the other. We opted for the Absolut vodka showcase in the end and treated ourselves to a glass of vodka which came courtesy of a vending machine with a difference…..there was a man inside pouring the drinks! Interesting to say the least.

As they were the more upmarket malls in Bangkok, we decided to head over to Siam Paragon and Central world for a browse. Topped off with a visit to the Siam Ocean World, southeast asias biggest. Which was great fun and we got to see the otters, sharks and penguins being fed. Last night we went for a stroll around Patpong, which feel free to google if you want to learn more, i will leave it at that………very eye opening!

Today we headed over to Chatuchak market on the underground (MRT), which was absolutely crazy, as always, very little organisation and more a free for all with maps that make no sense. We managed to snap up some Bargains and see some very cute little animals, which sadly were being sold in their masses (thankfully not as food!).

Bangkok is an amazing city and i would highly recommend anybody to come and visit, especially if you stay in the Silom area (where we are), which is like a Thai canary wharf. Time to have a little relax now and kick back with a beer, Chang of course.